Women are having fewer children than ever, according to data released by Statistics New Zealand in February, with New Zealand recording its lowest ever total fertility rate in 2018 of 1.71 children per woman, down from 1.81 in 2017.

The highest TFR recorded in New Zealand was 4.31 children per woman in 1961.

In New Zealand, it seems that while the number of births has decreased for every age group since 2017, the drop in the fertility rate is predominantly due to fewer births among women of child-bearing age under the age of 30. This group makes up half the women of childbearing age in this country.

Since 2002, it is women in the 30-34 age group who have been having the most children out of all age groups.

While the statistics do not tell us specifically why the fertility rates have been declining, this pattern has been seen internationally to go hand-in-hand with fewer infant deaths, women’s education and presence in the formal labour market being prioritised, and improved access to contraceptive methods. These factors help give women greater freedom to choose if and when they would like to have children. 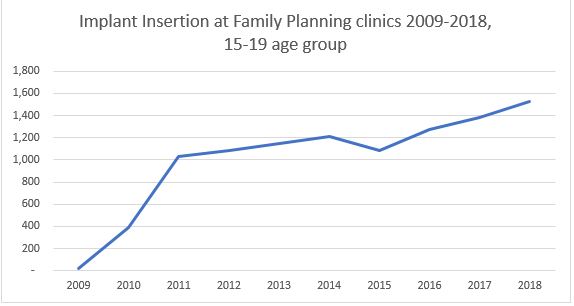 It can be assumed that at least some of the decline in the teenage birth rate can be attributed to the increased uptake of LARCs among this age group and that removing the cost barrier for implants in 2011 played a significant role in this increased uptake.

The Ministry of Health this month released its Report on Maternity, detailing health statistics about women’s pregnancies, giving birth and the babies born in the year 2017. They found that most women were registered with a Lead Maternity Carer (LMC) during their pregnancy and most did so within the first trimester. This is positive, as it has been well-documented that good, continuous maternal health care during pregnancy improves the health outcomes of both mother and baby, and the earlier this care begins in the pregnancy the better. They also found that close to 80% of babies born in 2017 were exclusively or fully breastfed at two weeks after birth, and fewer women were smoking during pregnancy and immediately after birth, suggesting that messages about how to best look after yourself and your baby are getting across to women.

For more information about current global fertility trends and what these mean demographically for the future globally, the United Nations Populations Fund State of World Population report for 2018 ‘The Power of Choice: Reproductive Rights and Demographic Transition.’  can be downloaded here: https://www.unfpa.org/sites/default/files/pub-pdf/UNFPA_PUB_2018_EN_SWP.pdf