Ovarian cancer is one of the lesser-known cancers affecting women, even though it is the fourth deadliest cancer for New Zealand women.

This month we take a look at ovarian cancer, its hard-to-spot symptoms and how you can best look after yourself.

Ovarian cancer is the one of five gynaecological cancers, which include:

Of these, ovarian cancer is the most likely to be fatal.

Although it is much less common than other cancers, ovarian cancer is very difficult to diagnose, as its symptoms are similar to other common, but less serious, health issues such as irritable bowel syndrome or constipation.

Symptoms often only appear in the later stages of the cancer, meaning by the time most women visit a doctor, the cancer may have already spread beyond the ovary.

It is for these reasons that ovarian cancer is sometimes called the “silent cancer”.

If you experience any of the following symptoms most days, for two weeks or more, you should make an appointment to see your doctor:

Your doctor might do a pelvic exam if they suspect you might have ovarian cancer, as well as ordering various tests (a blood test or an ultrasound scan.)

Be aware of the signs of gynaecological cancers, particularly ovarian cancer, and if you notice any symptoms, visit your doctor as soon as possible.

If you belong to any of the higher risk groups, speak with your doctor, and make sure you have regular check-ups. 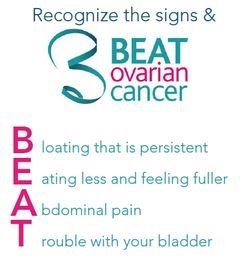 And talk to your doctor sooner rather than later.